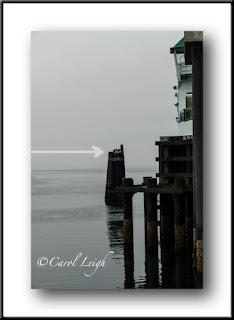 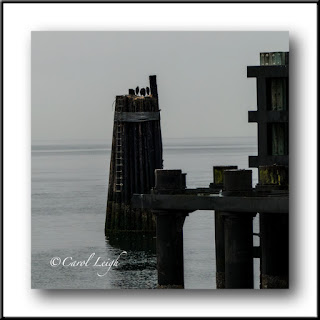 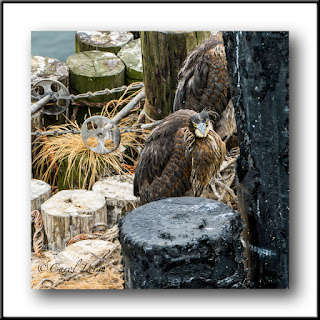 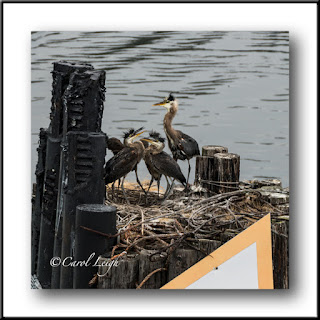 Last Thursday morning we were waiting for the ferry “Salish” to finish offloading cars/passengers at Keystone Landing in Coupeville. An extremely foggy morning. We were going to walk aboard, arrive in Port Townsend 40 minutes later, and just walk around town for a few hours.

I’d heard there was a great blue heron nest on one of the pilings next to the ferry, but that the chicks were going to fledge “any day now.” And yes, as I stood at the landing, there were the pilings, there were the four chicks. The ferry (the green bit in the upper right) was offloading at this point.

Let me blow up this photo somewhat so you can see the birds a bit closer.

And there they are, all four chicks, hunkered together. One markedly larger than the others. (You know it’s a bad photo when you have to put an arrow pointing to the subject!)

Once aboard, I took the stairs up to the top deck, only to find I couldn’t get quite as close as I wished, but it was still pretty amazing to see.

One of the chicks was having a very bad hair day. I could relate.

The adult heron had the ferry schedule memorized. As soon as the boat began departing the landing, she swooped in, neck swollen with tasty fish, and prepared to feed the chicks. The ferry departs surprisingly quickly, and seconds later the birds were well beyond my lens.

Terrific start to a very good morning in the Pacific Northwest. 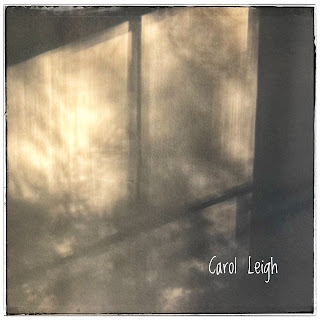 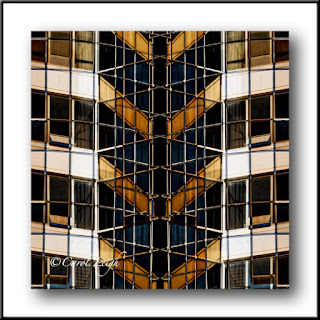 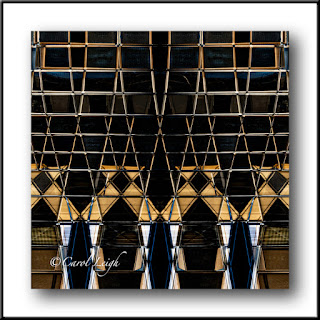 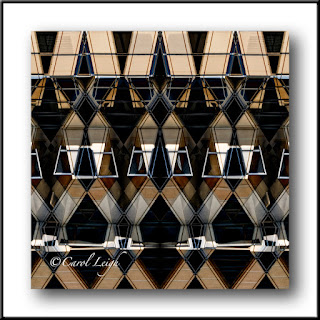 But there were some buildings across the way, kinda nondescript, but lots of repeating patterns. Aha! This just might work . . .

So I took some absolutely boring shots, figuring I'd play with them when I got back home.

And this is what happened. I love these photographs! I know they're abstract, and probably a lot of you won't like them, but that doesn't matter.

The colors are extraordinary, with all those warm brown hues. And the symmetry of asymmetrical objects/shapes is appealing to me. As is the mystery.

So, ta da! In my little world I've made some pictures that were fun to create, look cool to me, and make me excited to create more.

May we all have moments such as this.