Posted today on my professional blog . . .

A brief post entitled "Interesting to See What Buyers Choose".
Posted by Carol Leigh at 5:48 AM 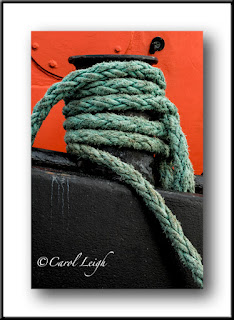 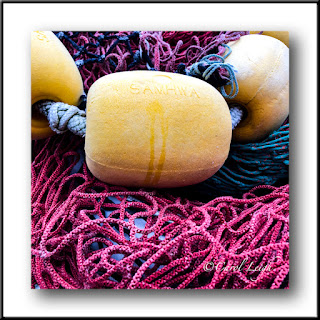 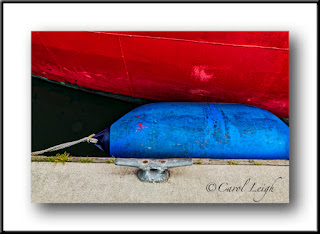 Kinda what I live for! Never can get enough. 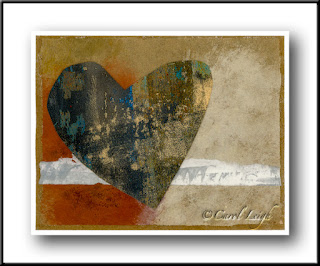 A friend of mine is going through some tough times, so I made her a collage, using just three pieces of paper: the heart (a gelatin print), a scrap of torn silver-painted paper, and a background of paper I'd used to clean my paintbrushes.

It was fun to make and she seemed to like it. The mercenary side of me, however, brought it into the computer before I mailed it to her, so that it now appears for sale on Fine Art America/Pixels.

Over on my professional blog, the latest post is about my first sale at Fine Art America. Here's the link: https://carolleighart.blogspot.com/ 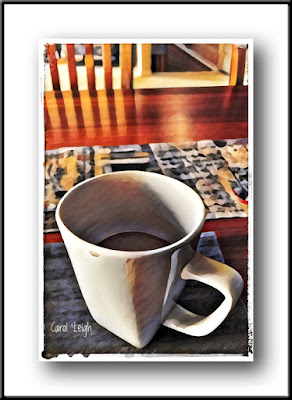 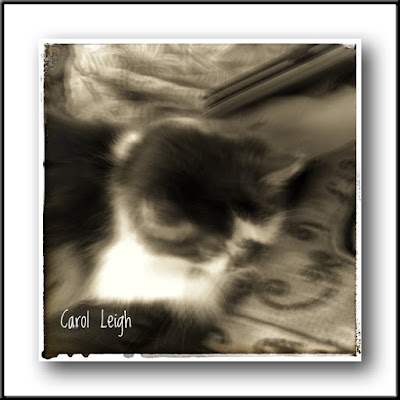 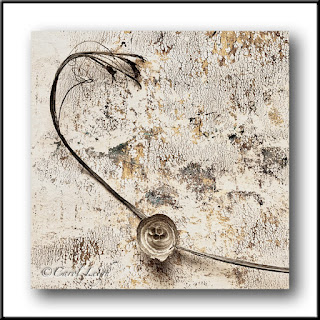 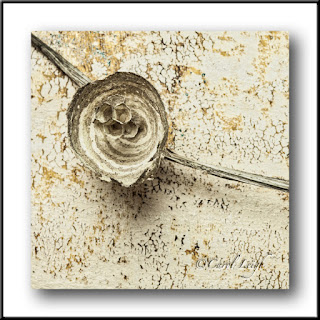 It's May, which means the lawn grows about 3" a day, and we are way behind. So this morning I was out there raking up lawn trimmings and I came upon a whole bunch of dead daylily stems I'd taken out a couple weeks ago.

As I gathered them up, I noticed a spiral form that looked sort of like a snail shell. I separated out the strand, looked closer, and saw that it was the outside of a wasp nest, sort of like a little umbrella.

On the other side were just a few little wasp "cubicles," each one with an egg inside. Cool!

I brought it inside and, in the first photo, shot it using the iPhone 8+. I like the curve of the daylily stem and I like the color of the light.

The second photo was shot with a full-frame Canon DSLR and a 100mm macro lens. I don't like the color very much, but didn't want to re-do it just for this blog. It's easier to see the individual eggs in this image.

As I enlarged each picture in the computer, it became obvious that although the iPhone does a good job, the eggs and their cubicles all had a sort of mushy look up close, whereas the DSLR image remained sharp as I enlarged it.

These are wasps. We already have plenty. Our yard doesn't need five or so more. What to do with them now? Well, I put the entire stem and the nest inside a clear jar. Some of the stem stuck out the top. So I put aluminum foil over the jar opening and wrapped it around the stem. If the eggs hatch, the wasps won't be able to chew through the aluminum foil (as they would paper). I don't believe the eggs will hatch, but if they do, they won't get out and buzz around my studio.

If anything interesting happens, I'll let you know . . . but don't hold your breath.

By the way, this is my personal blog, to see what I'm doing on a professional level, check out my pro blog at https://carolleighart.blogspot.com.
Posted by Carol Leigh at 4:30 AM

Focusing on the professional side . . . 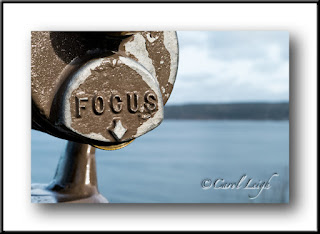 I consider this my personal blog, and in it I include what's going on with my life, what I'm seeing around the island, in the yard, etc.

Occasionally I include images of my latest work, but mostly it's personal, with a lot of iPhone shots.

I want to keep my professional images in one place, the ones I upload for sale at Fine Art America / Pixels, and the projects I'm working on.

So just to complicate my life, I've set up a "professional" blog here: https://carolleighart.blogspot.com where I can showcase what people are buying, what I've recently created, experimental images, etc., all directed to the professional aspect of my work.

My goal is to post daily, but we all know how that goes! If you'd like to follow me on that blog, please subscribe to it and you'll be notified when new material comes up. Thanks!

All images copyright ©2019 Carol Leigh
Posted by Carol Leigh at 5:39 AM 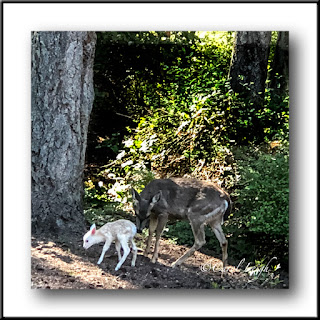 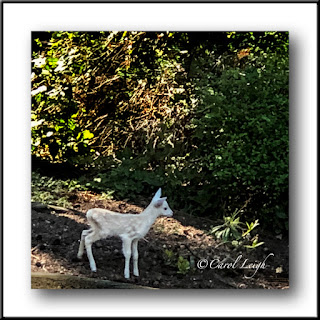 Just the coolest thing! Chris spotted this newly-born white fawn and his mom, quickly called me upstairs, where I photographed them through a dirty window, using an iPhone camera, zoomed all the way out. In other words, horrible photos, but we do what we can with whatever we've got.

Mom was licking the baby, who was having a tough time just standing upright. Mom then moved down the driveway, much to the fawn's dismay.

The fawn had a tough time stepping up 2.5" onto the driveway, but quickly adapted and soon was gone from sight, following mom.

We haven't seen them again this morning, but we have high hopes.

I've been told that these "piebald" fawns are the result of overpopulation, and because of their light color, are vulnerable to predators. Probably nature's way of "thinning the herd."

Their only predators on-island are vehicles. Alas.

Copyright @Carol Leigh.
Posted by Carol Leigh at 9:22 AM 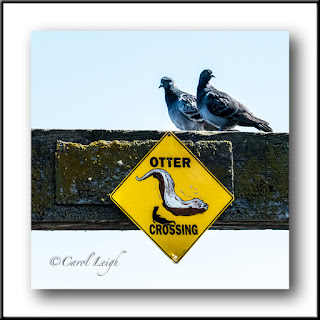 Otter-watchers Millie and Floyd. They tell me they’ve been vacationing on Whidbey Island for years and they’ve NEVER seen an otter on this dock.