Pith: Soft, spongy cells which store and transport nutrients throughout a plant. Pithy: Having substance and point, tersely cogent.

Remember Rolodex files? Offices used to store (some still do) names, addresses, telephone numbers on small (1.75 x 3.25 inches) notched cards which were attached to a "wheel." You spun the wheel to find the card holding the info you wanted.

Note: The cards that come with the Rolodex are incredibly thin and flimsy. So a lot of the time I make my own, cut up a photo I'm throwing out, let's say, use a special punch to create the slots, and voila! Instant (more substantial) card. Or I'll glue a scrap of painted and torn watercolor paper to the card to give it substance.  The result is a Rolodex wheel bristling with mismatched and often colorful cards. A visual treat (to me) as well as a mental one.

I showed the Rolodex to some of my workshop students who thought it was the coolest idea and who sat at the table just rummaging through it. I offer you a few examples here, hoping you'll find it interesting as well. These cards are not meant to be polished works of art, just colorful little pithy quotes, ideas, reminders. As usual, click on each one to enlarge. ©Carol Leigh
Posted by Carol Leigh at 5:30 AM

Things that have come into the house lately 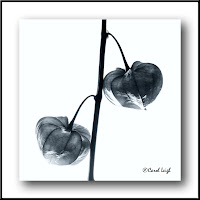 A few things made their way into the house last week. Fun gifts from friends, fun photography for me. First is the box of rusty washers and coins from Elena, who knows the way to this girl's heart! And the box they came in? She created the coolest texture on the lid, which I photographed close-up and which will undoubtedly find its way into some of my photomontages.

And then a close-up of a daisy plucked from a bouquet from Janet and Ira. This flower is no bigger than a half-inch across, so I used a macro lens and a couple of extension tubes to fill my frame with it. A blue scarf creates a natural-looking "sky" behind it.

A bouquet of bright orange Chinese lanterns (Physalis alkekengi) is now hanging upside-down to dry, but not before I photographed part of this stem. The pods are so colorfully saturated that I took an opposite tack and toned them to a bluish-grey color. (The opposite of what Janet, the color maven, would have done!)

Chris, while our group photographed fishing nets last week, picked up a couple pieces of rust, thinking I could do something cool with them. So you see a photo of the two pieces he found, and then my close-up macro shot of one of them, looking remarkably like some rocky landscape. He's got a good eye for this sort of thing, doesn't he?

The rusty washers and coins will make their way into photomontages and collages. The textures? Same thing. The flowers? Always in my heart. The wine, bread, biscotti, and other goodies people brought have, unfortunately, made their way into my stomach! ©Carol Leigh
Posted by Carol Leigh at 5:21 AM 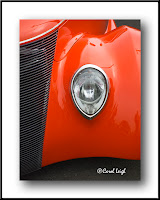 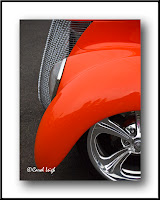 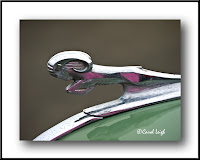 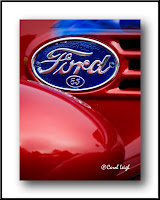 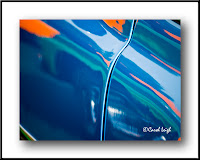 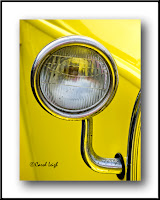 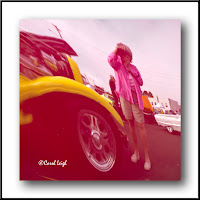 Waldport's annual "Cruzin' for Crab" car show went on today — always a good turnout, always lots of beautifully maintained cars to be photographed. As usual, I concentrated on color, reflections, and simple lines. The last photo is a self-portrait. Sure wish I was as tall and slender as this car made me look! ©Carol Leigh
Posted by Carol Leigh at 11:00 PM 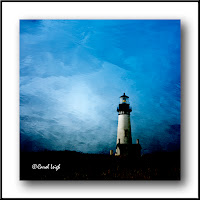 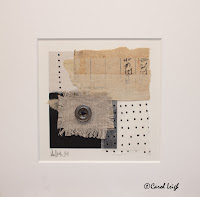 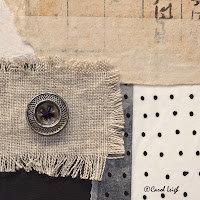 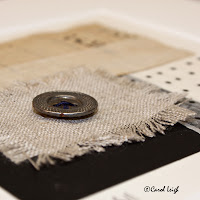 "Metal Button and Linen"
This collage is made of vintage papers, tracing paper, ink, paint, linen and a vintage silver-colored metal button. I bought a jar of old buttons at a flea market and this one stood out, looking kind of dilapidated and textured and weathered (and I mean that in a good way). I sewed it onto a piece of frayed linen and made it the focal point. Size: 5" x 5" in an 8" x 8" mat. Price: $60, which includes First Class Mail shipping. To order, please visit my online store: http://shop.carolleigh.net/

For information about the rest of my collages, please visit my website at http://www.carolleigh.net/collages.htm. Thanks! ©Carol Leigh
Posted by Carol Leigh at 11:08 PM 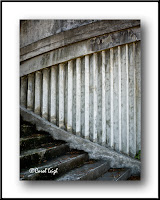 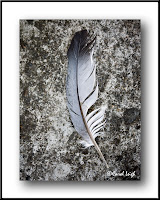 Our group worked the Yaquina Bay Bridge yesterday afternoon, which gave us lovely photos of architectural detail. A feather on the steps caught my eye. Okay, I'm lying. I saw a feather on the grass and placed it on the step. Is there no TRUTH in photography any more? But was there ever? ©Carol Leigh
Posted by Carol Leigh at 5:01 AM 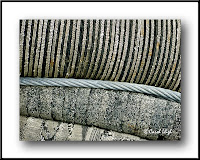 We've got a photo workshop going on right now and it's fun to see "my" neighborhood through others' eyes. I took them to shoot the fishing nets and found I was particularly attracted to these two very monochromatic scenes. Lots of texture, lots of flowing lines, and classic Rule of Thirds. ©Carol Leigh 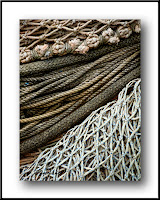 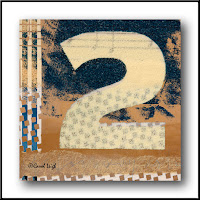 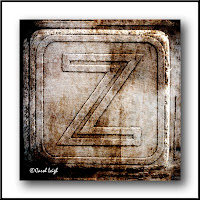 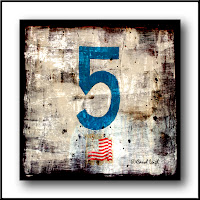 These three have been sitting around for awhile. Time to get them out of the folder and into the light.

The "2" is part of a collage I began but, dissatisfied with it, never completed. As I create physical collages, I photograph bits and pieces of them along the way because, well, because you never know...

The "Z" is a photo of a child's block and then combined with a photo I took of the texture on a wall.

And the "5" is a combo of a picture I took in a bunker in Astoria, Oregon and a 5/flag I photographed on a building in Williams, Arizona.

Happy weekend, everyone. ©Carol Leigh
Posted by Carol Leigh at 4:49 AM

Why yes, we DO have a room available...

And there's a pool!

In April of 2005 I drove from Oregon down to Tucson to conduct a photo workshop. Along the way, on Highway 40 in Arizona, I passed this fine establishment. Screeching a U-turn, I stopped to photograph a bit.

I never really processed these photos until this morning, when I came across them while rummaging through an older external drive.

This was six years ago. The motel is probably gone. Wish I'd taken even more photos while I was there. Why, why, why do we not spend more time at the time? There always seems to be some internal pressure to keep moving.

One of my dreams is to spend two weeks in one location, wandering about, photographing by day and making collages in the evening. Silent. Exploring. Creating. Ahhhh! ©Carol Leigh
Posted by Carol Leigh at 5:29 AM 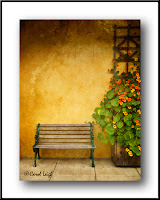 The little town of Wheeler on the Oregon coast is always worth a photographic stop, and this time coming down the coast I was drawn to a bench and a planter full of nasturtiums. The overcast light and the warm color of the building added to the appeal. I had to wait for a car to leave a parking space before I could frame this shot, but it was worth the wait. ©Carol Leigh
Posted by Carol Leigh at 8:03 AM 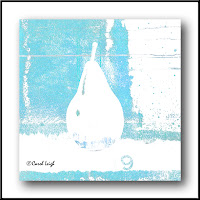 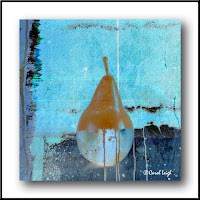 Back in April I posted photos of two pears, which you can see here, if you wish. And here are two more. (Click to enlarge.) Do you find yourself drawn to certain subject matter? It can become an obsession, can't it? Well, pears do that to me. I do not like the taste, but boy, oh boy, they sure look good! So what's one of your photographic obsessions? ©Carol Leigh
Posted by Carol Leigh at 6:04 AM 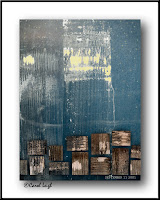 Unfortunately, it is easier to destroy than it is to create.  ©Carol Leigh
Posted by Carol Leigh at 4:02 AM 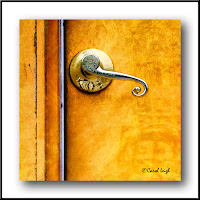 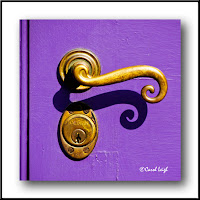 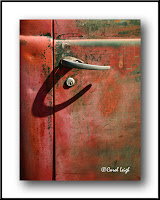 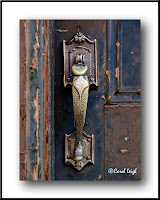 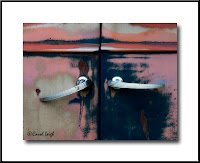 As I move photos around in my computer, working on old ones, filing newer ones, little themes develop such as this one. It's a cool series of door handles, beginning with a golden door in Colorado combined with a background texture I made myself.

The purple door with the terrific shadow was shot in Fredericksburg, Virginia. And below that, the rusty car door and handle was shot in the sun (gasp!) here on the Oregon coast.

A more muted but very rich door handle was found and photographed in Jacksonville, Oregon (I believe — could have been Oakland, Oregon, but I don't want to go back and check right now). The double handles on the car were shot in Colorado.

The bright red photograph I took at a car show here on the Oregon coast, but now I can't figure out what my shooting angle was. It's an MG car, but neither Chris nor I can figure out what the original configuration was. Still, gotta love the color, the blue thingies, and the shiny chrome. ©Carol Leigh
Posted by Carol Leigh at 6:38 AM 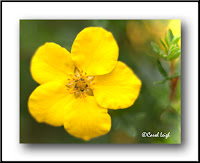 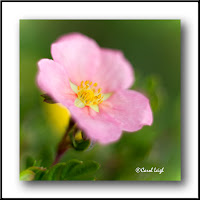 We have three little bushes of these guys in the back yard and they've bloomed beautifully all summer. Amazingly, the deer (who have given my fuchsia bush a very bad haircut) don't eat them. I used to know what these were and now, wouldn't you know, the only "safe" plants to grow out back and I'm clueless.

From a photo-geek standpoint, see the beautiful out-of-focus background? I shot these with a 50mm lens and an extension tube. The aperture was f/1.8, a super-wide-open aperture, which caused the background to go really, really soft. And I find it really, really pretty! ©Carol Leigh
Posted by Carol Leigh at 4:26 AM

In the papers that Kathleen A. sent me there was this vertical swooshy brush mark that she'd made. I made some brush marks of my own on a different piece of paper. Photographed both papers. Combined them here. Woo hoo! ©Carol Leigh
Posted by Carol Leigh at 6:20 AM

Beauty in the ordinary

I sent each of my macro students this year a set of toothbrushes to photograph, encouraging them to look at them in a slightly different way than simply topped with toothpaste en route to their mouth. It's always fun to see what they come up with.

In the first shot, I concentrated on the handle shapes, making them look like little translucent hills.

In the second shot, shallow depth of field turned the handles in the background into soft sweeps of color.

Dental hygiene ... who knew it could be so pretty? ©Carol Leigh
Posted by Carol Leigh at 5:10 AM