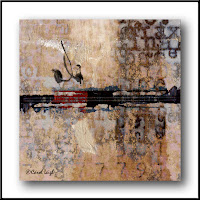 Sometimes when I create my photomontages, I'll create two different versions, one rectangular and one square. And it's interesting to see the different feel between the two. Sometimes I like one version, sometimes the other, but it's always good for me to create them both, just to have a comparison.

I'll often begin these pieces and then walk away from them for a week, a month, a year, to revisit them later with new eyes. That's what happened here. I knew I had SOMEthing, but wasn't sure what, when a couple of months ago I began working on this. It all came together yesterday.

This photomontage was made from a variety of photographs, including typewriting on onionskin paper, peeling paint, a scratch on the side of a train car, a bit of red paper, part of a wall in Mexico, an adding machine tape, etc.

This "squarification" concept works well in "normal" photography as well. Let's say you have a landscape and you've composed your photo so that the barn is more toward the left side of the horizontal frame. What if you were to crop away some of the right-hand side? You may find that now your barn looks pretty prominent; all of our attention goes to the barn rather than wandering around a larger frame. Sometimes this is good, sometimes not, but the key thing is to THINK about the possibility of squaring your frame when you're taking the photograph.

Try it. Take the perfect landscape shot. Then think, "what if this were a square format?" Recompose your photo and take it again.

And think about photographs you've already taken. What if, on a cold and rainy day, you were to rummage around in your computer, looking for images that might benefit from being presented in a square format? You might be surprised (pleasantly) at what you find.

©Carol Leigh, who squarifies more often than not . . .
Posted by Carol Leigh at 5:42 AM