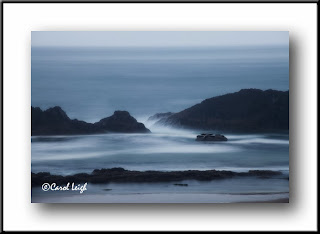 The sun was down but I stuck around to see how things would look at twilight. This is a 25-second exposure at f/11, ISO 100, of the waves coming in at Seal Rock, just up the road. Such a long exposure softens the wave action, softens the spray, as well as the sky.

When I looked at this photo at 100%, I could see that there were six seals draped across that little flat rock over toward the right and it was easy to see that in those 25 seconds, they barely moved at all. Well, they're seals and that's their job . . . ©Carol Leigh
Posted by Carol Leigh at 6:26 PM