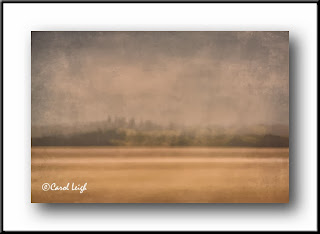 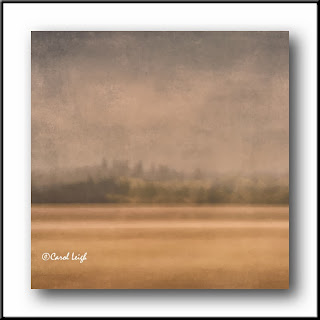 Most of the time, when looking at my photos, I know when something is working or not. But every once in awhile, such as with this photo, I just don't know. Most of me likes it, but that solid feeling of confidence just isn't there.

We were driving up to the airport in Portland a couple of weeks ago. The fields right next to the road were dry and light brown. Off in the distance it was raining on low green hills. I selected a slow shutter speed (1/6 second) to create a feeling of movement as I shot out the (moving) car window. I added a texture that would accentuate the golden brown foreground colors and that would also accentuate the grey, rainy skies in the distance.

The reason I like the photo is that it makes me think of an old-fashioned, flat, landscape painting. I also get a definite feeling of movement, which is what I wanted.

But then someone else might think, "That's just a flat, out-of-focus, dirty picture! No artistry there!" If I had the solid feeling of confidence that I usually have, I wouldn't care. But there's a nagging feeling of insecurity lurking in the back of my head that's agreeing with the critic.

But what the hell! I uploaded both these formats to my website at Fine Art America and let's see what happens. I've sold almost 40 pictures there this year, so I must be doing something right. Will this one go out the door? I'll let you know.