Latest work: "One Through Six" 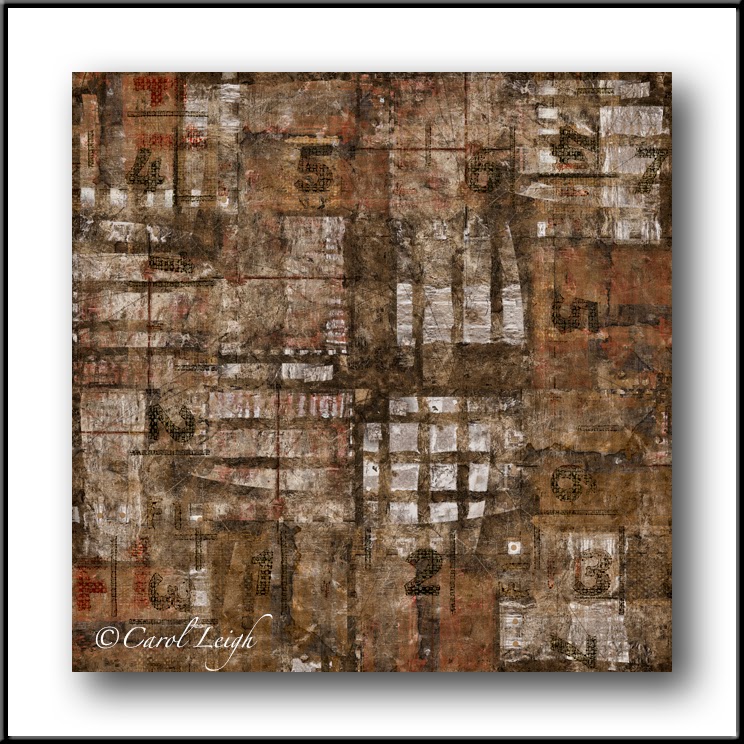 Yes, I am still slogging through computer challenges, although the slog is going much, much faster now. But I'm not sleeping much and am not eating much, so I'm not exactly at tip-top form these days. No matter. I press on.

This piece began with a photomontage "work in progress." Do you have these? Things you're making but they don't seem to be going anywhere so you set them aside, revisiting them sometime in the future to see if maybe new eyes will give you new inspiration? That was the case here.

My background was all sorts of things -- torn paper and cardboard, probably some metal, I don't know -- I make so many photomontages now it's hard to keep track of the individual components.

But this montage seemed too red to me, so I made it browner (but see the bits of red still coming through here and there?) and then I added photos I'd taken of really old measuring tape. I mean REALLY old, brown, stained, yucky, but I have 100 feet of it measuring tape. Hence the numbers you see here and there.

I pronounced it done and moved it over to Fine Art America. We shall see.

Sometimes you just can't dither around with a "work in progress." If it becomes a "work in CONSTANT progress," it begins to sap your energy, remind you of things left undone, and becomes a hindrance rather than an inspiration. So yup, this be done and it's time to move on to something new.

It's going to be (gasp!) sunny here this weekend . . . wishing you all warmer temps, less snow and ice, and spring on the nearby horizon.

P.S. And Fran R., my recent FAA friend? I now picture you there in Montana, peering into the screen, reading these words. Wishing you an especially productive day!
Posted by Carol Leigh at 3:50 AM