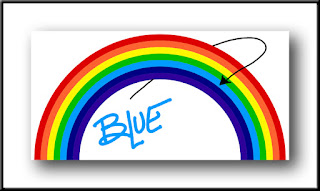 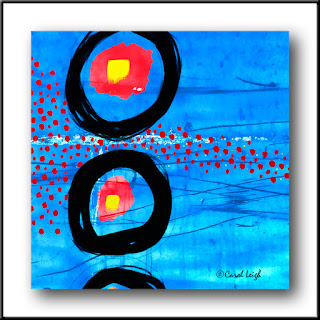 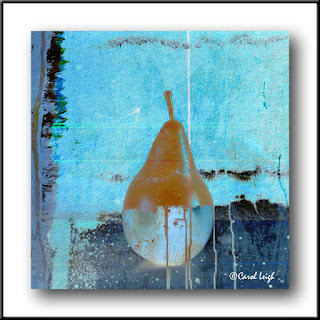 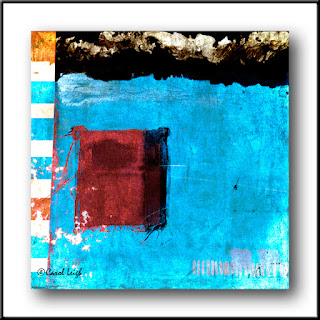 Blue's pretty much a universally beloved color and it's always easy for me to find examples that incorporate blue. Not so easy, however, for me to find photomontages I've made with blue as the main color, but here are three I particularly like.

Scratched metal forms the basis of the first picture, undoubtedly photographed while I was wandering around the fishing boats on the Oregon coast. And I like the feeling of movement I created by using the red blobs, which seem to drift from left to right.

We move from movement to still life in the next shot of the pear, to which I added dripping paint and texture from the ubiquitous fishing boat. I like how the golden brown color of the pear works with the complementary blue surround.

And then lastly is a photomontage that yes, contains photos of fishing boat textures. The square boxy thing? I believe that came from a piece of paper I photographed, paper I'd used to clean a brayer after painting something.

I used to be able to identify every item in my photomontages, "Oh, yes, that's a part of my grandmother's earring I mixed with a photo of the bottom of an oil can and a picture of a blender lid." I've now made so many that sometimes I don't even recognize my own work. "I made THAT? When? Darned if I remember how I did it. But it's cool, isn't it?"

It's now Monday and I pray that my Internet access via my desktop computer is up and running. Tough to do this on a cellphone. It's still Wednesday the 17th as I write, but I'm optimistic.

©Carol Leigh
All text, photographs, and other media are ©Copyright Carol Leigh (or others when indicated) and are not in the public domain and may not be used on websites, blogs, or in other media without advance permission from Carol Leigh. Thank you!
Posted by Carol Leigh at 1:30 AM