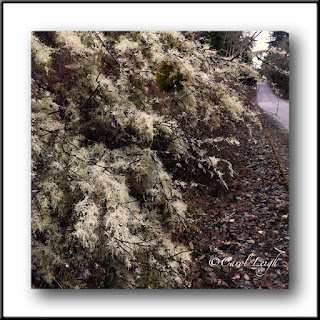 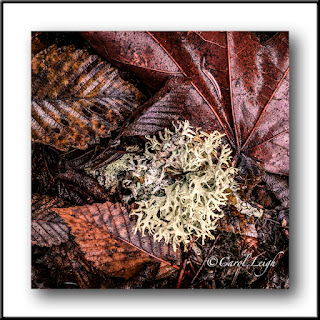 We live in a rural environment, not a regular "neighborhood" with sidewalks and such. We can't see our neighbors (neither from the street nor from our house), so going for a walk is rather an adventure.

(This first picture shows you moss (Usnea longissima) and lichens growing on tree branches right next to our road, which angles away in the upper right part of the frame.)

This morning I heard tree frogs, a chickaree (Douglas squirrel), a pileated woodpecker, and chickens.

I thought the chickaree was chattering at me, so I chattered back and moved closer. Usually they're higher up, on a tree branch, but this one (hidden from view) was down low and didn't move off as they usually do. Suspicious behavior.

A sudden flapping of wings and crackling of brush silenced the chickaree as a large bird zoomed away, leaving behind a pile of grey feathers. I didn't see the bird, but it was either a hawk (we have sharp-shinned and Cooper's hawks) or an owl (we have great horned and barred owls). I apparently disturbed its breakfast.

The chickaree hadn't been worried about me at all. It was keeping its eye on the predator and warning everybody to WATCH OUT! A warning I obviously missed.

I moved on, ending up photographing some big-leaf maple and alder leaves, adorned by a little crown of oakmoss lichen (Evernia prunastri). A good walk, indeed.

©Carol Leigh
All text, photographs, and other media are ©Copyright Carol Leigh (or others when indicated) and are not in the public domain and may not be used on websites, blogs, or in other media without advance permission from Carol Leigh.
Posted by Carol Leigh at 11:49 AM