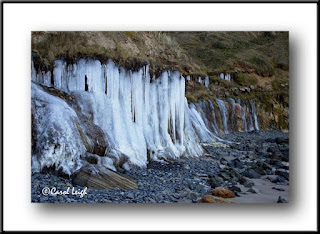 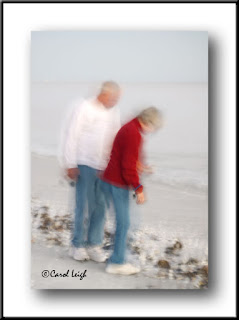 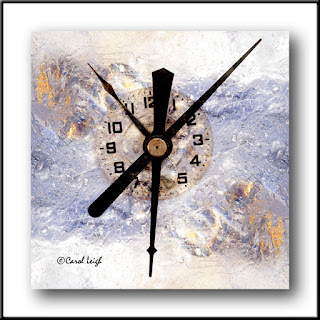 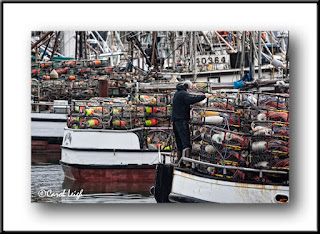 Blogs are sort of like scrapbooks, you know? Keep at them long enough and you have a visual record of your life.

"Remember when we went to Florida and encountered no-see-ums for the first time?" Or, "I miss Dungeness crab season on the Oregon coast and all that activity, don't you?"

So I looked at the pictures I've posted in my blogs each December, going back to 2009. I selected one photo for each year.

And in '09 there was a big freeze on the Oregon coast, where water oozing out of the bluffs next to the ocean turned into frozen waterfalls. It was magical! And COLD.

Sanibel Island in Florida was NOT cold in December of 2010. This couple was hunting for shells and I liked their silver hair, their matching jeans, new sneakers, and especially her vivid red sweater. I purposely used a slow shutter speed to blur them into unrecognizability yet capture their togetherness as they both bent forward a bit looking for beach treasures.

In 2011 I was making weird things, using photos of (in this case) ice and clock parts. The preoccupation with time remains with me, although I seem to have no concept of it in real life.

And finally, crabbing season about to begin in 2012. All the boats along the docks in Newport, packed with crab pots and colorful buoys... So much going on, so much color, so much activity, and so much at stake for these folks, where a successful haul means a good Christmas and a strong financial start for the coming year.

Four more photos coming up in the next post. Fair warning!

©Carol Leigh
All text, photographs, and other media are ©Copyright Carol Leigh (or others when indicated) and are not in the public domain and may not be used on websites, blogs, or in other media without advance permission from Carol Leigh.
Posted by Carol Leigh at 6:30 AM