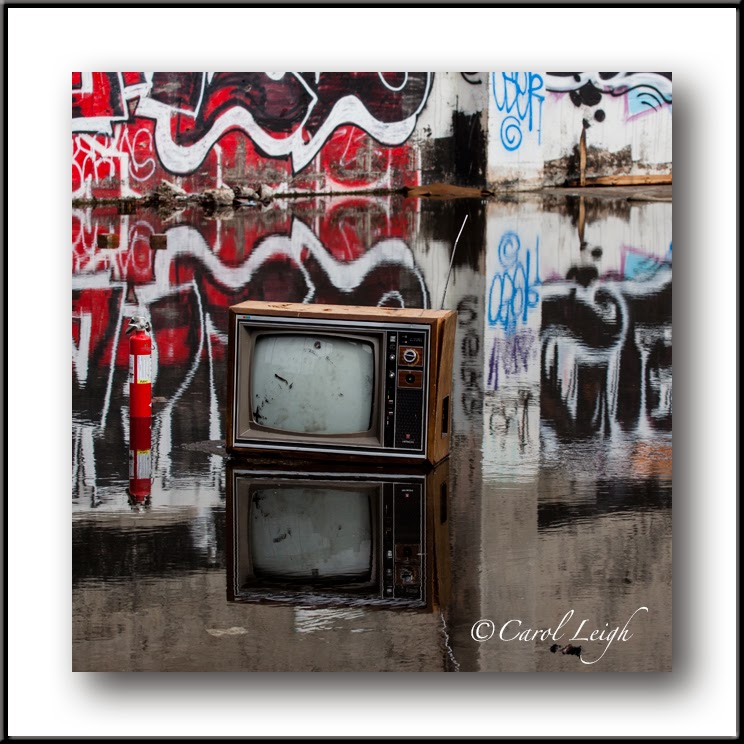 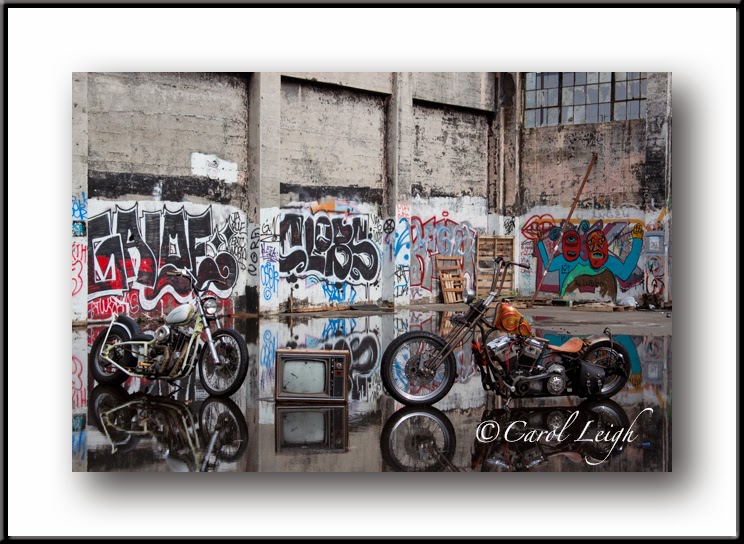 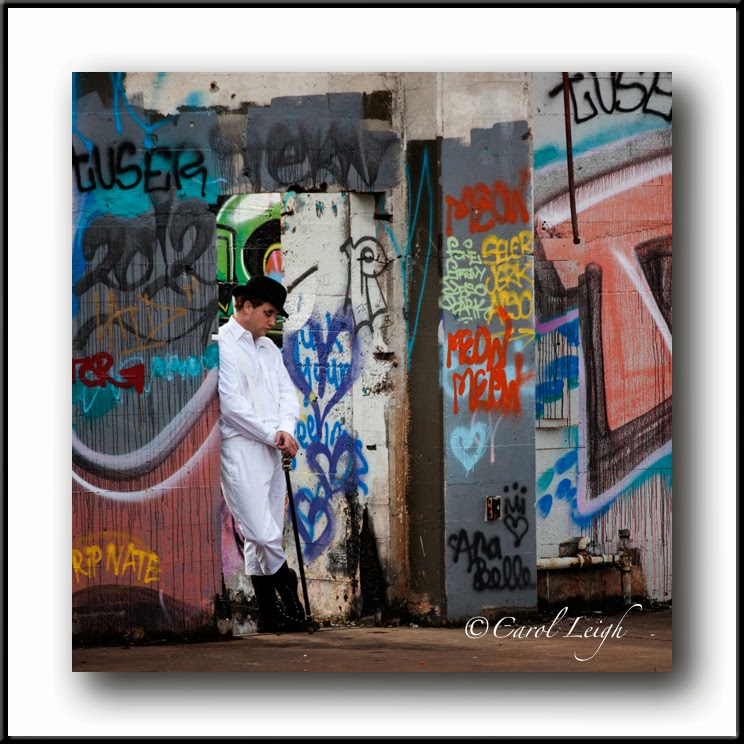 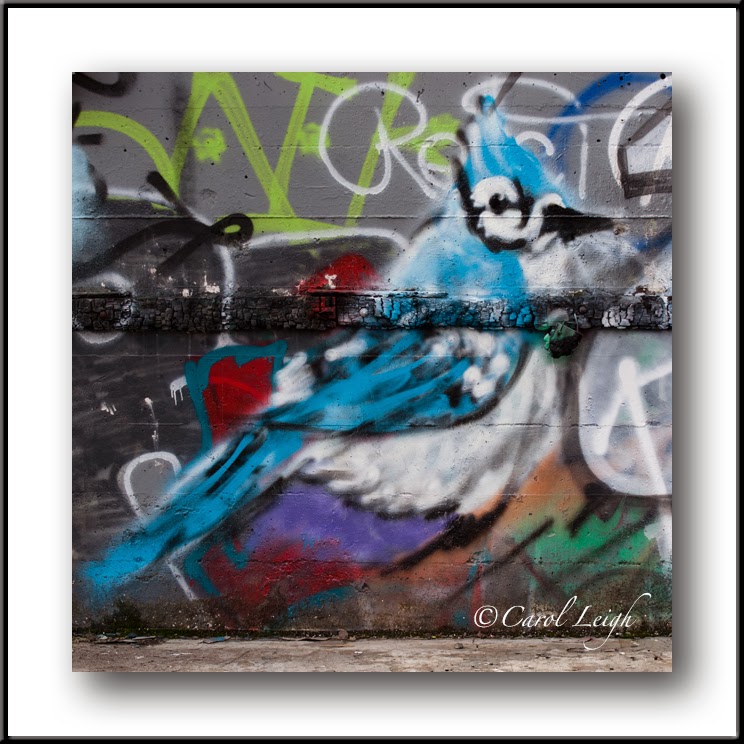 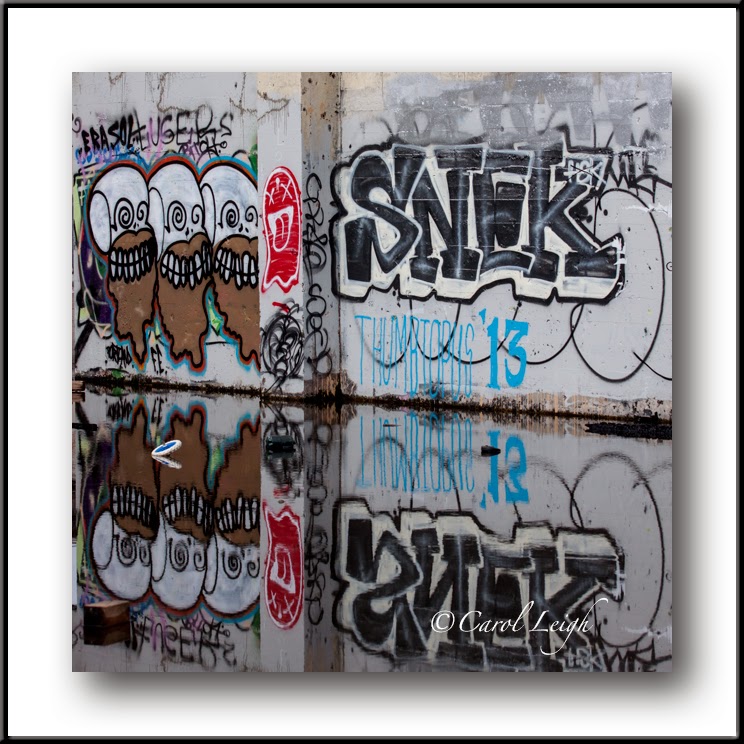 You never know when a memorable moment is about to occur. You just have to be open, be ready, and go with the flow.

Chris and I spent the weekend in Portland, and one of the things I wanted to do on Sunday was revisit an industrial area that Linda H. showed us a few years ago.

But before shooting on Sunday, we had dinner with Linda and Hugh on Saturday night, and Linda told us about a building that had burned, leaving just the walls and a lot of charred beams.

Chris and I found the place the next morning. It was all fenced in, alas, but aha! We found an opening in the fence, and that’s when the madness began.

Oh, my. It was incredible. The roof was gone, the walls were braced to prevent them from falling in, and colorful graffiti covered everything. Here and there were very large puddles of water, perfect for reflections.

What immediately caught my eye was an old TV set, staring out from the middle of a huge puddle. The sight was startling, incongruous, and totally absurd. Sitting in the water next to the TV was a bright red fire extinguisher. Ridiculous. I took a few shots.

And then a couple of guys on motorcycles arrived. They saw the TV, the puddle, and immediately placed one bike next to the TV. They took a few photos with a little point-and-shoot camera. Then they brought in the second bike. Then they found part of a radio and leaned it against the TV. They embellished the scene with a black high-heeled shoe they fished out of the water. For reasons known only to them, they left the fire extinguisher in place throughout. Never touched it.

Voila! Instant art, They took a few more photos and then were on their way.

But while the biker guys were still assembling their art, Chris and I began talking to a man who was shooting, just as enthralled as we were with all this graffiti.

Turns out he’s been shooting at this spot for a long time, even at night with moonlight reflecting off the water. He recognized a lot of the graffiti art, told us who made it, gave us a lot of the backstory.

His occupation? He works for the graffiti abatement department in Portland! Ha! What a fascinating and fun guy to talk to.

But that’s not all.

While biker guys were still working, and while graffiti abatement guy was still talking to us, some people dressed as “Clockwork Orange” characters were conducting their own photography tableaus. So now and then we’d spot a woman brandishing a club, a guy posing moodily in a doorway, and another woman dressed in black wearing a clear plastic mask.

This was one of the strangest, most surreal events I’ve experienced in a long time. It was weird, interesting, bizarre, absurd, and so much fun!

I’ve not had time to really do any processing (it takes 3.5 hours for us to drive home from Portland), but wanted to get something quickly posted while the day remained fresh in my mind.

Portland. Classically weird. And proud of it!