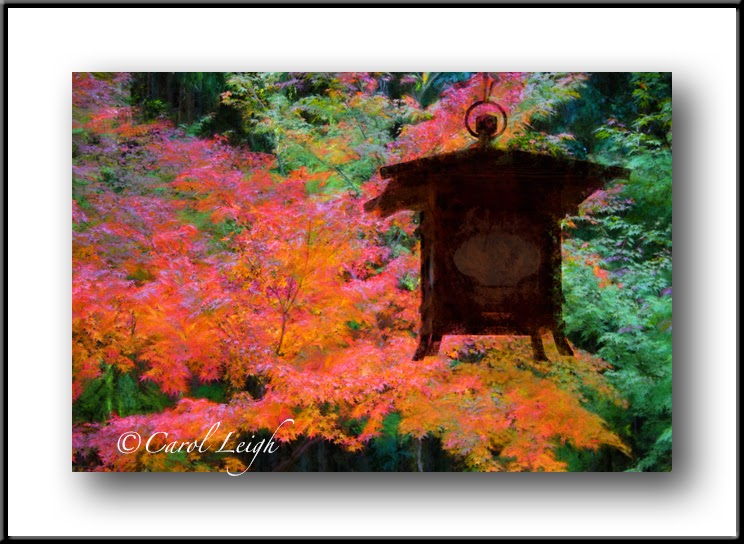 I'm working very slowly through my Kyoto photographs. The trip itself was life-changing. My photographs? I'm not thrilled. But that's okay. Because I keep going back to the term "life-changing." Or maybe it should be "perspective-changing."

Our culture, compared to the little I saw in Kyoto, is so loud, brash, overbearing.

An example: I was checking in at Asiana Airlines in Osaka to return home. It's a foreign airport. I was traveling alone. I was hoping that I would end up in the right spot. At the head of the line was a "greeter" of sorts. He spoke English and I said I was a little nervous. He said "don't be nervous" and he disappeared for a moment, only to come back and say, "I found you a new best friend! This woman is going to Seattle, too!" I looked and saw an obviously American woman named Nancy and so we chit-chatted a bit, went through all the procedures, spent a bit of time in the waiting area, and all was well.

Sure, I could have done this fine all by myself. But the fact that there was someone who cared, who saw another American and put the two of us together so we might not feel so alone, was a gift.

It was this sense of caring, of recognition, of helpfulness that impressed me during my trip to Japan. Everywhere I went, everyone I interacted with, was kind and gentle. I return to the United States and it's as though a switch has been clicked on. Or off. Waiting in line at customs and an airport official striding back and forth ordering "No cellphones! No cellphones!" with a determined and stern look on his face.

Or watching an elderly Chinese couple trying to go through security and the agent being sarcastic, demanding, and patronizing to these foreigners who obviously didn't speak English and weren't exactly frequent flyers. (It's tough enough as an experienced American citizen to go smoothly through security.)

This is an extreme thing to say, but these officials, these "welcome to America" employees, came across as Nazis. "Stand in line. Take off your belt. No, don't put your watch there (sigh), put it in the bowl. No! In the bowl! (eye-roll)." It was embarrassing.

The Japanese emphasis on small bits, an appreciation for simple things, for a prettily wrapped gift, the way a dish is placed in front of you and then turned so that you see its best side. Small wonders. And even a slight, oh-so-slight forward bow when passing me on the street (and my delight in slightly bowing in return) was a gift. I obviously stood out as decidedly not-Japanese. Trudy, a fellow photographer on this trip, commented on this recognition, describing it as an "I see you, you see me" sort of thing. And that phrase will remain with me the rest of my life.

We can learn a lot from this culture, a culture that welcomed me as an obvious foreigner and did everything it could to make me feel I was not an imposition.

I realize that I was there for just a short time, that I didn't see everything, that maybe there's a lot of rudeness and impatience and officiousness that I wasn't aware of. And I know that there is a lot of compassion and helpfulness and kindness here in the United States. I know I'm generalizing.

But to return home, walk through the veil, and be assaulted by anger, sarcasm, and rudeness was so jarring, so like a slap in the face, that I can't help but compare.

So yes, my pictures from this trip do not represent my best work. But the interactions I had with everyone I met, what I learned about respect, what I learned about appreciation, about sitting up straight (!), far outshine my disappointing pictures. My photographs, even if they had been spectacular, aren't nearly as important as what I learned those ten life-changing days in Kyoto.

All text, photographs, and other media are ©Copyright Carol Leigh (or others when indicated) and are not in the public domain and may not be used on websites, blogs, or in other media without advance permission from Carol Leigh. Thank you!