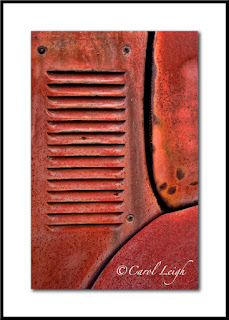 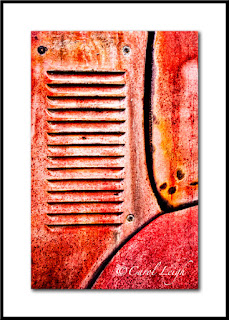 The top photo is an image I took in 2008, using a Canon EOS 20D camera. And I processed the image as I usually did back then.

Looking at it today, eight years later, I find it rather dull. But what I like about it is the strong vertical slightly curved line and how it meets the highly curved line bottom right.

I also like the way the vents create a series of horizontal repeating lines. Horizontal lines that move your eye from top to bottom, echoing the strong vertical line on the right.

It's a combination of soft curves and straight lines. I like the texture and I like the color.

I found it in a directory I'd labeled "monochromes."

I opened the file yesterday morning and wondered what I might do to it now, eight years later.

Using Adobe Camera Raw, I lightened and brightened the image. I also increased the contrast, and, using the clarity slider, enhanced the sharpness.

Not content with that, I looked in a directory I have of metal texture photos. I selected a picture I'd taken of scratched metal, desaturated it to remove the greenish cast it had, and then added that picture to the mix.

Is the bottom photo better than the top? Eight years later, have I learned anything? I'm not sure.

But notice this: You see a stronger sense of line and design and composition in the top photo. Why? Because it doesn't have the color "distractions" that you see in the bottom shot.

So I'm going to go with the second photograph. Overall it's more appealing (to me). But I do like how the design pops out in the first.

What's my point? I don't really have one, other than to say it's fun to revisit old photographs with new eyes and new skills. That this learning process never ends, and how lucky we are that it doesn't?!