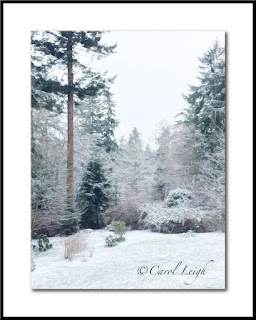 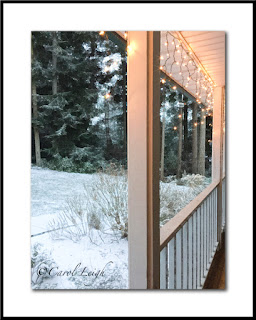 We had snow on Whidbey this past weekend and were trapped at home. Even though it wasn't much (relatively speaking), it was the terrain that did us in.

Our driveway is kind of steep, and with a bit of snow on it, should the car begin to slip, slowly descending the driveway could easily turn into Mr. Toad's Wild Ride down into the street.

Once on the street, one encounters the "dip." And the dip is a significant one. I've heard about one of our neighbors who puts on chains at the top of the dip and then removes them once she gets to the other side!

So we cancelled the party we had scheduled for Saturday and just hunkered down and enjoyed the show.

The top photo is our back yard as seen from the living room windows. So pretty.

And the second photo was taken from the front porch. Equally pretty.

We put out lots of birdseed, which attracted juncos, varied thrushes, towhees, kinglets, and a hawk. Who was attracted to the birds. We could tell when the hawk was near -- not one little bird to be seen.

Snow. A novel experience for us. And absolutely lovely, don't you think?