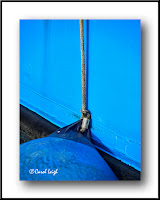 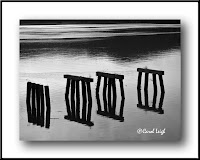 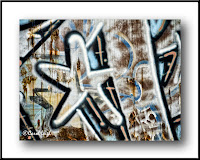 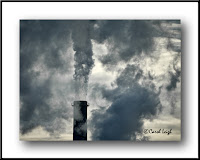 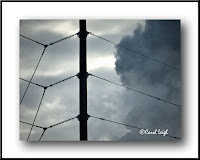 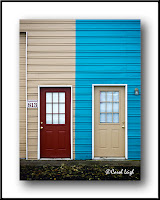 As is our wont on holidays (when it's not raining), we went for a little drive. First to the fishing boats to see what's going on there, where I found a blue buoy/bumper hanging down against an equally blue fishing boat.

Then we followed the river road toward Toledo, stopping to photograph the remains of an old train trestle. Then to Toledo to photograph graffiti on the sides of railroad cars — a favorite photo subject which I try not to mention very often because it's weird and I hate graffiti but love to shoot it, which is also weird...

Steam spewing from a smokestack at the Georgia-Pacific facility caught my eye because of the beautifully textured cloudlike formations the steam created. Powerlines even looked good silhouetted in front of the "clouds." And finally back to South Beach to photograph multicolored buildings.

We did not contribute to America's economy by lining up at 0-dark-thirty to purchase anything (thereby avoiding nasty pepper spray and trampling possibilities) and we bought nothing except lunch at a local restaurant. It was a TERRIFIC day, though! Peaceful, nobody on the roads, and beautiful things to see.

©Carol Leigh, who is thankful for being able to wander, look, and take photographs.
Posted by Carol Leigh at 5:03 PM