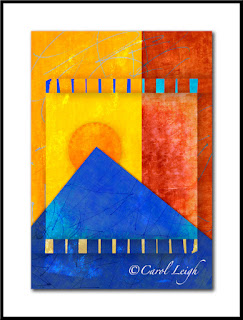 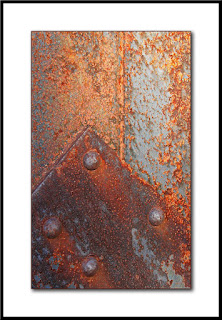 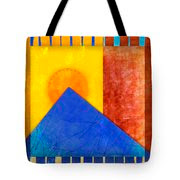 Sometimes I'll see a photo, a drawing, a painting, and, instead of seeing what it IS, I notice the composition, the movement, the elemental blocks of the picture. And I'll save the image for future reference, an image that might inspire me to perhaps create a photomontage using that same picture's structure. Not the technique. Not the same elements. Not the subject matter. Just the way the picture was put together.

And that's the case here. Have I copied someone else's art? Have I used their same subject matter, their technique, the actual picture? You tell me.

Up top you see a photomontage I created a few weeks ago. What inspired me was a photo I'd saved. A photo of rusted metal and rivets. I wish now that I'd saved the photographer's name along with the photo.

Because I'm drawn to rusty stuff, this photo caught my eye. But what really drew me in was the simple composition. A triangular form at the bottom with two rectangular-ish forms in the background. So that's where I began.

I blocked out my canvas, rummaged through my photographs of walls and various textures, put a big triangle at the bottom with two different-colored vertical elements behind it.

It was boring. But that's where the fun begins. I added other elements, removed some of them, altered others, looked through more of my photo files to see what I could add, how some ink slashes might look against the background colors, etc.

All that experimentation, based on a simple photograph of rusted metal, resulted in the colorful work up top, an image I call "Colograph." It also looks particularly well as a tote bag, which appears on my Fine Art America website. (This isn't an ad for the tote bag; I just thought you'd like to see how cool an image can look on one!) And I also think my "Colorgraph" image would look great printed on metal. But I digress...

Have I copied the photograph of rusted metal? I would say no. Did I copy the texture, the colors? No. But I did copy the basic bones of the photographer's composition. How he or she created something cool by using some simple geometric shapes and how I came up with something interesting and, importantly, decidedly different.

Just thought you'd like to see some background behind this particular photomontage.