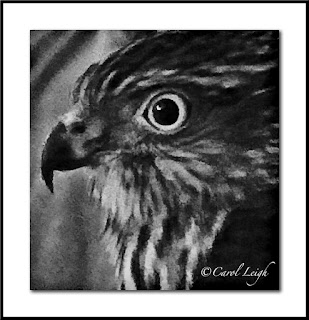 Yes, nothing like sharp-shinned hawk for a Thanksgiving meal! Not as fattening nor filling as turkey, don't you know . . .

We have friends here on Whidbey Island. And they have family elsewhere, mostly in southern California. Lots of family. And they were all up here for Thanksgiving and kindly invited Chris and me to share in the chaos festivities.

There must have been 30+ people, ranging in age from newborn to hmmm, maybe 75. Wonderful folks, all of them, very welcoming, very kind, very generous. We immediately felt at ease, at home.

Well, except for the children part.

You know me and kids (well, you probably don't), but I tend to avoid them whenever possible. Especially when there are roving gangs of them. One or two at a time, that's okay. More than that and I just want to get out of Dodge. But this was fun! Great children, all of them.

Our friends have many nieces and nephews, and two of them, Casey and Chris, are falconers in southern California. They drove up here with their two birds, a sharp-shinned hawk and a red-tailed hawk. They let them fly earlier in the day, which I didn't see, but they (upon request) brought them out after dinner so we could take a close look at these beautiful birds.

I was shooting with a cellphone in a darkened dining room and Chris's pink shirt was in the background, so I tweaked the heck out of this shot and it's still horrid. But ooh, look at her eye! So pretty.

The guys were knowledgeable about the birds -- it was like listening to Ranger Rick during "Raptor Encounter" at a park somewhere. Very, very cool. I asked about owls. Anybody do any hunting with owls? "Hunting with owls is the most boring thing in the world." Me: "Even if you were to maybe just toss out a mouse?" "Nope. They sit on their perch for hours until they're in the mood. Boring!" Okay. Learned something new.

Hope you all had a good Thanksgiving, full of raptors, no mice.