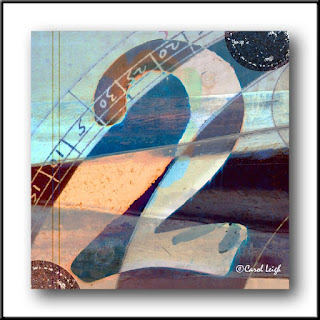 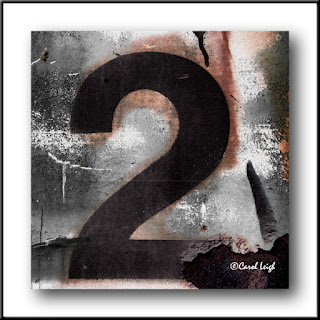 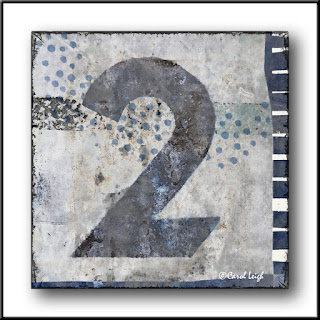 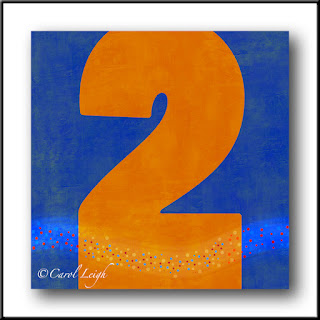 For this second month of the year, February, I was going to post a "2" photo or photomontage every day. I quickly found 23 pictures, but during my search for six more, time got away from me and before I knew it, it was February 3 and my moment had passed.

Undeterred, and, frankly, not knowing what to write, damned if I'm going to let some of these go to waste! So here are four twos, four that I particularly like and don't mind inflicting upon you.

The first "2" is a very early one, so I don't remember where I got the number, but I do know that part of the background came from a sign I photographed at the Getty Museum years ago. I like the soft blue colors and the way the "2" seems to be "swimming" left while the arc leads my eye right.

The second "2" I photographed on a railroad car and the background a photo of a rusty and weathered Jeep. (Personal hello to Bugsy, my photo friend who was just as enthusiastic as I was photographing at the Orange Empire Railroad Museum in Perris, California.) The monochromatic/neutral colors appeal to me, as does the grungy texture. 'Tis a weathered yet stately "2."

The third "2?" I don't even remember making it, but I do know the element on the right is a set of lines made with a marker. The horizontal element is probably a strip of rusted material I photographed. The picture is muted and subtle, quite a contrast with the next one...

The bottom, colorful "2" is part of a series I made called "Numerical Flotation Devices" that were entirely computer-generated. I know the "Flotation Device" series is a weird one, but love the big bold numbers and how I made each number and background a different color.

©Carol Leigh
All text, photographs, and other media are ©Copyright Carol Leigh (or others when indicated) and are not in the public domain and may not be used on websites, blogs, or in other media without advance permission from Carol Leigh. Thank you!
Posted by Carol Leigh at 4:34 AM