(Not) Driving the Blue Ridge Parkway 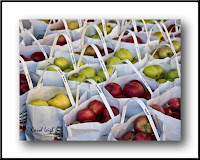 This was my first visit to the Blue Ridge Parkway and yes, I had expectations. I envisioned a slow-moving, meandering road, lots of turnouts, lots of photo possibilities, amazing vistas, and various shades of blue as the soft edges of the mountains faded into the distance.

The first thing I learned is that there's a difference between "leaf peepers" and photographers. The 45mph speed limit meant absolutely NOTHING to the leaf peepers, who zoomed up and down the road, impatiently waiting for me, traveling at 45mph, to move over and get the hell out of their way.

In addition, the two-lane road is relatively narrow, north and south traffic separated by a double yellow line. Every 20th car, it seemed, was driven by a leaf peeper intent on peeping at leaves, not on driving, and the car would invariably drift into my lane. Master of symmetry that I am, I would in turn drift over to my right to avoid instant death. Alas, quite often there was a ditch on my right, about the same width as a tire. Should I drift too far to the right, I risked coming to an abrupt halt, hurting me and my Hertz.

There are indeed lots of pullouts along the Blue Ridge Parkway where one can park, get out of the car, and admore the views. Assuming one can find a place to park.

Cars were double- and triple-parked, requiring a certain amount of last-second pre-planning, looking for (a) a place to park that (b) also had an exit route. A famous crafts center right on the parkway had a large parking lot -- no spaces available and a steady stream of incoming traffic. I hear the place is very nice inside...

And accommodations? It's leaf peeping season AND there are big football games going on. I could find nothing less than $180 all along the route. "It's gonna be that way up until you get into Virginia, I figure," was what one helpful motel employee told me, laughing.

I got off the parkway, drove twenty winding miles down to a lower, flatter elevation and found a motel room for $69. I admired the trees on the golf course before turning in for the night.

Don't want to end this on a down note. Would I travel the Blue Ridge Parkway again? Yes. But I would make reservations six months in advance and would stay in a cute little town like Blowing Rock, perhaps, going out onto the Parkway to photograph very early in the morning and very late in the afternoon, spending the middle of the day shopping, walking, shooting in town, eating apples, and snoozing. And I'll bring Chris. He can drive while I peep at the leaves. ©Carol Leigh
Posted by Carol Leigh at 3:36 PM