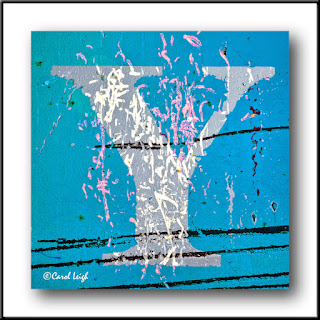 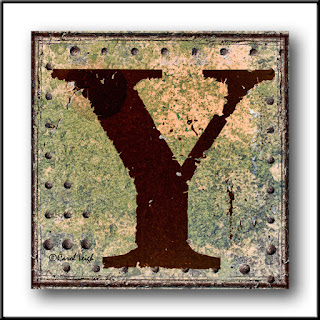 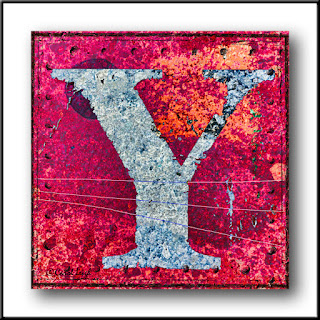 Three pictures of the same letter "Y." They're so old that I don't remember exactly what went into each one, but the "Y" I do remember -- it's from the 73-foot fishing vessel "Kylie Lynn" in Newport, Oregon.

What's fun about creating photomontages like these is that they change depending on what images you blend together, and what blending modes you use.

The common denominator here is the letter "Y."

In the first image, I combined it with a photo of scratches on a fishing boat. The original blue color of the "Kylie Lynn" remains the same.

In the second image, I used photos of rivets I'd taken of the bridge in Waldport, Oregon. The background is a picture of some paint splotches on asphalt in a parking lot.

The components in the red image are the same as the green. Same rivets, same sort of squarish form upper right, the circle at the right-hand middle edge.

And then I added some thin lines running horizontally in the lower third. Why the lines? I do not know. Seemed like a good idea at the time.

So there you have it.  Same letter Y, different components, different blending modes.

©Carol Leigh
All text, photographs, and other media are ©Copyright Carol Leigh (or others when indicated) and are not in the public domain and may not be used on websites, blogs, or in other media without advance permission from Carol Leigh.
Posted by Carol Leigh at 6:45 AM